Tour North Laos is an extraordinary journey to discover the natural wonders of the northern area of the country in remote provinces off-the-beaten-track, including impressive caves, places of worship and remote villages, in contact with the traditions and the authenticity. An unconventional route enriched by the experience in the Natural Park Nam Et and the Night Safari.

It is essential to take into consideration that in some areas are not available high level accommodations and therefore is essential a fair amount of adaptation.

Continue to the impressive archaeological mysterious site of the “Plain of Jars“, to Vang Vieng, the town framed by dramatic scenery of karst mountains, lush forests, and impressive caves, and to Vientiane, the capital that mixes French-colonial architecture with Buddhist temples such as the national symbol Pha That Luang.

The entire itinerary is developed overland, from/to Luang Prabang.  However can be further customised to suit your travel and budget needs, it can continue to Cambodia through the land border and can be combined with other routes.

After breakfast we transfer to the pier and board for a river cruise to Pak Ou Caves, or “Thousand Buddhas cave”, situated at the confluence of the Mekong and Ou river, one of the most significant visits during your journey in Laos.

Later we proceed by boat to Kamu Lodge, the private ecolodge that contributes to the maintenance of local cultures and traditions.

In the afternoon you can visit the Kamu village or take part in some rural activities such as planting and harvesting rice, traditional fishing, gold panning (scour gold – from January to June), practice archery.

In the morning we board to return to Luang Prabang. Along the way we stop at the local village Ban Muangkeo known for its traditional production of rice wine.

Upon arrival in Luang Prabang we visit the National Museum, former Royal Palace, now home to an important collection of precious including Buddha statues and many gifts received from dignitaries visiting the court of Luang Prabang. We continue along the quiet streets of the town bordered by buildings from the French colonial period to admire the architecture and learn about their original function.

In the early evening we visit a local house to attend a special tradition in the Lao culture called “Baci”, a spiritual ceremony that has origins dating back to the period before the introduction of Buddhism in Laos.

According to animist beliefs still practiced, each person has 32 spirits that make up the individual’s spiritual essence. The ritual has the function to recall and “synchronize” the spirits, and thus their relative effects on 32 of the human body organs. It is said that also helps to balance the harmony of the individual and the community. In fact, it is practiced as a good omen on several occasions, birth, marriage, departures, returns, beginning of the year, etc. At the ceremony are prepared flowers and sweets and are recited mantra. At the end, participants receive individual blessings.

We begin the journey that leads to remote areas of northern Laos following routes through mountains and incredible landscapes inhabited by local ethnic groups.

We reach Oudomxay province, home to 23 ethnic groups. During the transfer we will make several stops to meet the locals and learn about their ancient traditions.

In the late afternoon we reach our destination, the rural village Muang La. After checkin in homestay will have free time to stroll around the village, meet the inhabitants Khmu tribe and visit the sacred temple nearby.

We continue our journey in northern Laos towards Muong Khoua where we board a traditional boat for a leisurely cruise on Nam Ou river to Muong Ngoy, the small village surrounded by incredible landscapes and mountains.

After breakfast we begin the hike (30 minutes) Tham Kaang cave used as a refuge during the Second Indochina War (1962-1975), known in Laos as The Secret War. During this difficult period, thousands of civilians in rural areas were forced to seek shelter in caves, which although not comfortable, kept alive the hope of salvation. To avoid being seen by the air raid the farmers were forced to cultivate rice fields at night.

Tham Kaang cave fortunately was not damaged by the bombing. The context is extremely scenic, between amazing landscapes, green paddy fields and the river that comes out of the cave. You can only explore it for about 15 meters, to where the depth allows.

Afterwards we continue the hike (about 1h-1h30 – simple walk through the rice fields) to Ban Houay Boor village inhabited by ethnic groups Khmu and T’ai Deng.

After lunch at a local house we continue to Ban Na village (about 1 hour – easy walk through the rice fields), before returning to the guesthouse at Muong Ngoy. 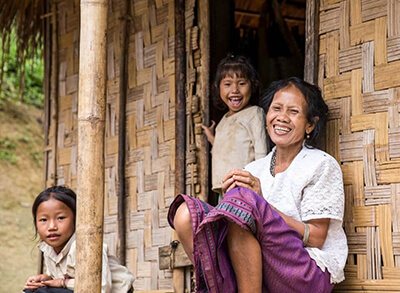 In the morning we begin 1h boat trip on Nam Ou River towards Nong Khieu. Upon arrival we visit the beautiful Tham Pha Thok cave.

We proceed with the transfer by car following a natural path of mountains and karst formations that leads us in Houaphanh province in north east Laos, to Viengthong, home to the Nam Et Phou Louey National Park NPA (National Protected Area). During the transfer we make some stops to visit the mountain villages and observe closely their daily lifestyle.

Once at the National Park we proceed to checkin at the Ecolodge. Free time to stroll around or to visit the hot spring. (At the ecolodge are available only very basic accommodation)

At 8.00 am from Viengthong by minibus to Ban Son Koua village (1h30) inhabited by Khmu tribe, following a route surrounded by beautiful mountains. We meet the tribal guide who is waiting to accompany us on a visit to the village and explain the local animist traditions. We continue on a local boat on Nam Nern river for about 1h30 in a charming green rice fields and lush forests. Upon arrival to the national park we proceed with the accommodations in typical bamboo huts nearby the river.

After lunch we will be briefed by park staff about the activities of guard saves the environment and protected species in the park.

By mid-afternoon we embark again for an excursion on the river (45′) and continue walking in the forest where the local guide will explain how to recognize animal tracks and will highlight the presence of the park’s wildlife. We continue upriver by boat to the designated point for a picnic dinner around a campfire, while the local staff will tell the folkloric traditions of Khmu tribe and introduce us to some useful information about the evening safari.

Afterwards we begin the evening excursion by boat along the river. The guides will only be provided with flashlights to try to spot wildlife. The expectations of being able to see some specimens must not be too optimistic considering the small number of animals in the park and their natural wariness of humans. Should the guides spot an animal they will give us a clear signal to invite us to light our torches. The animal species that live in the park are Sambar deer, otters, various species of owls, lorises and porcupines. At the end we return to the ecolodge.

Before breakfast the guide will accompany you for a walk in the jungle to show us some medicinal plants and explain the use by the villagers.

After breakfast at the ecolodge we return by boat to Ban Son Koua village while the guide will show us the local wildlife along the way.

Afterwards we transfer by car to Xieng Khoang, a highly affected province by American bombing during the Second Indochina War. The route is scenically exciting and reflects the authentic landscape of Laos. It isn’t common to encounter many other tourists around here. The journey is a bit long but we will make several stops where there will be interesting photographic opportunities.

In the morning we reach the Plain of Jars, the archaeological site of considerable size where hundreds of large jars are set back on the big plateau. Archaeologists claim that the jars are dated about 2000 years but still have not found a concrete explanation to their actual use, which have been used as funerary urns or simply to contain the famous rice wine.

Later we continue the visits at Muang Khoune, once capital of the autonomous principality Tai Muang Phoan in the 16th century, heavily damaged by American bombing. Along the way we visit the villages of ethnic minorities Thai Dam (Thai Blacks) and Phuan. 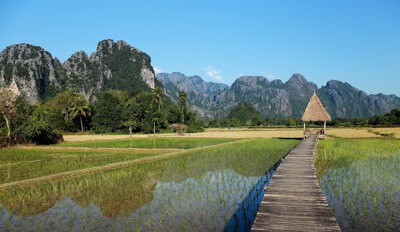 In the morning visit Phonsavan market where we have the chance to meet different tribes who travel daily to exchange their goods.

After checking in at the hotel we cross the river and reach Ban Huai Ngai village to learn about the local lifestyle.

In the morning we begin an unconventional trip aboard a local tractor through the rice fields to visit the famous Tham Phoukham caves, among the finest in Laos.

The entrance to the cave is definitely not of the simplest. However, for those who do not feel like venturing inside, is worth it enjoy the wonderful natural surroundings or take advantage of a refreshing swim in the natural pool in front of the cave entrance.

Later we transfer by car to Luang Prabang.