A cultural tour in Myanmar to discover the rich culture and the wonders of Burma in 7 days.

Hop on a private boat at Inle Lake and learn about the daily life of local fishermen, the floating artisan farms, the famous “one-legged” rowers and discover the suggestive archaeological sites of Indein.

Visit the notorious Mount Popa on the core of an extinct volcano  active about 25,000 years ago, home to 37 magical spirits.

This example itinerary can be customized according to actual travel needs and can be combined with other routes. 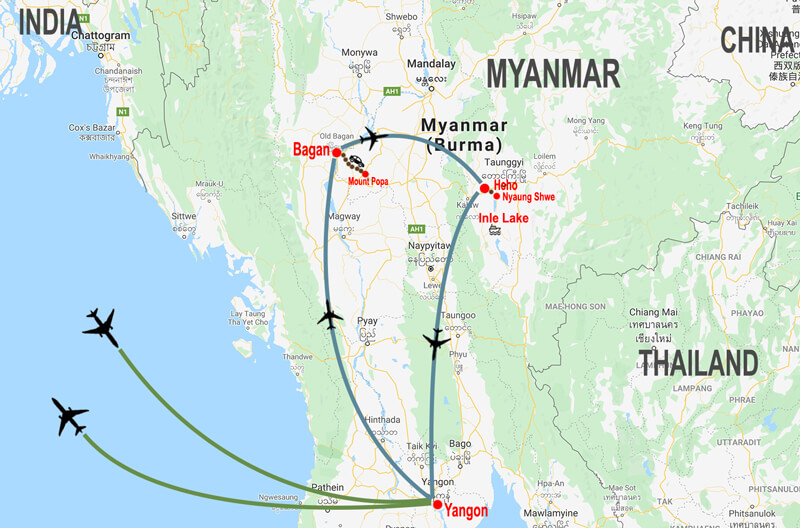 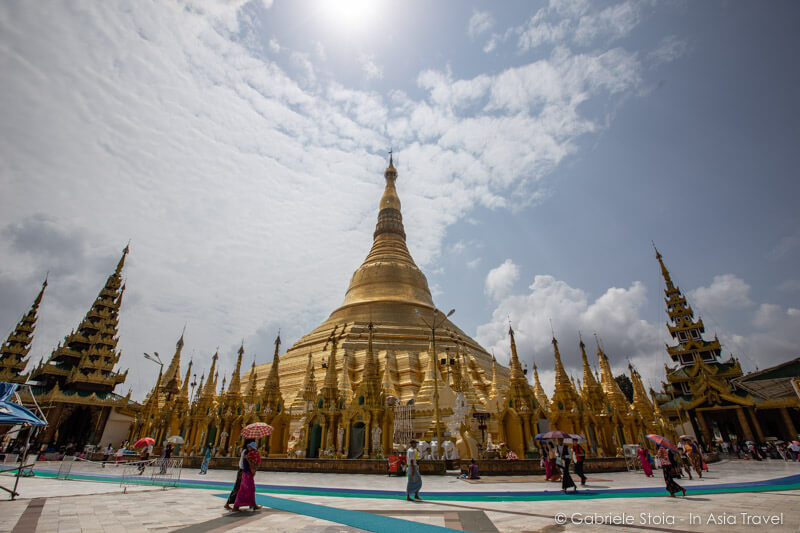 Arrive in Yangon and transfer to the hotel.

Visit Sule Pagoda, built in the 3rd century and today part of the economy of the city, and continue to Chauk Htat Gyi Buddha Temple, known for the 72 meters reclining Buddha statue, among the largest in Myanmar.

We end the day at the famous Shwedagon Pagoda, the most sacred in Myanmar. The massive bell of the stupa is gold-plated and the tip is embellished with diamonds, rubies, sapphires and topazes. An unmissable show and the most suitable place to end your journey.

In the early morning we catch the domestic flight to Bagan the ancient capital of the Kingdom of Pagan from IX to XIII, formerly known as the Arimaddanapura. Of the 10,000 temples 2,200 survived over 700 years of history. Bagan was for many decades the center of religious studies since the times of the Khmer Kingdom.

Upon arrival we visit the colorful and crowded local market: a unique opportunity to observe local folklore and learn about the Burmese daily lifestyle. We continue with a visit to Shwezigon Pagoda, the prototype of the stupas built subsequently in Myanmar, for an introduction to the rich history of the archaeological Bagan temple complex.

Afterwards we visit Wetkyi-In Gu-Byauk-Gyi temple, known for the narrative murals of the Jataka (previous life of Buddha) and the two-storey temple Htilo-Minlo, known for the plaster sculptures.

After lunch we continue to Ananda temple, one of the greatest architectural masterpieces in Bagan, built in the early Mon-Myanmar style. We proceed to That-Byin-Nyu temple, built during 12th century, the highest in Bagan, to Dhamma Yangy temple, known for its singular brick construction , and to Gawdawpalin temple.

Enjoy the romantic sunset from Nyaung The het Hill.

Transfer by car to the notorious Mount Popa, about 50 km southeast of Bagan (1h), the core of an extinct volcano, active about 25,000 years ago.

Is known for the popular belief that the animist recognizes as the abode of Nats: 37 magical spirits both feared and honored by the majority of the Burmese people. The mountain reaches an altitude of 1520 mt. To reach the top it takes about 45 minutes.

Visit the Mahagiri Sanctuary, Mahagiri Shrine, dedicated to the Nats. From the top you can enjoy a spectacular view of the valley.

At the end return to the hotel in Bagan.

After breakfast transfer to Heho by domestic flight.

Upon arrival transfer to Nyaung Shwe and board on a private boat to explore Inle Lake and discover ethnic and craft villages: an exciting opportunity to closely observe the famous method the Burmese unique style of fishing “one leg rower“, farms, floating gardens and small islands. Visit Inthar Heritage House, a decorated compound in Inthar art.

In the afternoon we continue the visit to Nampan village known for its traditional production of cigars. We continue to Phaung Daw Oo-Phaya Pagoda, the most sacred in the state Shan, to the weaving workshops in Inpawkhon and to one of the markets on Inle Lake (vary by day of week).

In the morning we continue the visit to the southern part of Inle Lake.

The boat leaves the lake and enters a narrow canal surrounded by a beautiful natural environment and then continue to a small village inhabited by Pa O tribe.

From the village continue along an old covered path to a 13th century monastery and the impressive ruins of Indein Pagoda Complex : hundreds of ancient pagodas half hidden by vegetation. The main stupa on the top of the hill offers a breathtaking view of the surrounding mountains.

In the morning visit Nyaung Shwe market and transfer to the airport in time for the domestic flight to Yangon.

Upon arrival we visit Kandawgyi Park where we enjoy the beautiful view of the Karaweik barge, the sumptuous palace built in the 70s on a royal barge.

We end the day at Bogyoke Aung San Market, or “Scott Market”, one of the largest bazaars in Yangon where over 2000 merchants sell clothes, precious stones, traditional crafts and souvenirs.

Transfer to airport for departure flight.

Included : Hotel, breakfast and private transfer to the airport