Classic Vietnam Tour is an example of a 9-day itinerary that, as the name suggests, includes the most important and classic visits in Vietnam, from Hanoi to the Mekong Delta.

Stroll through the streets of charming Hanoi and visit the Temple of Literature, Vietnam’s first university, the imposing mausoleum erected in honour of Ho Chi Minh, the charming Old Quarter where you can enjoy delicious street food, and the renowned water puppet show.

Immerse yourself in the beautiful nature of Halong Bay, a UNESCO World Heritage Site since 1994, considered to be one of the Seven Wonders of the World, framed by incredible karst mountains.

Experience the magic of the Mekong Delta, known as the ‘‘rice bowl of Vietnam”, as you cruise on a traditional sampan through floating villages and colourful riverside market. 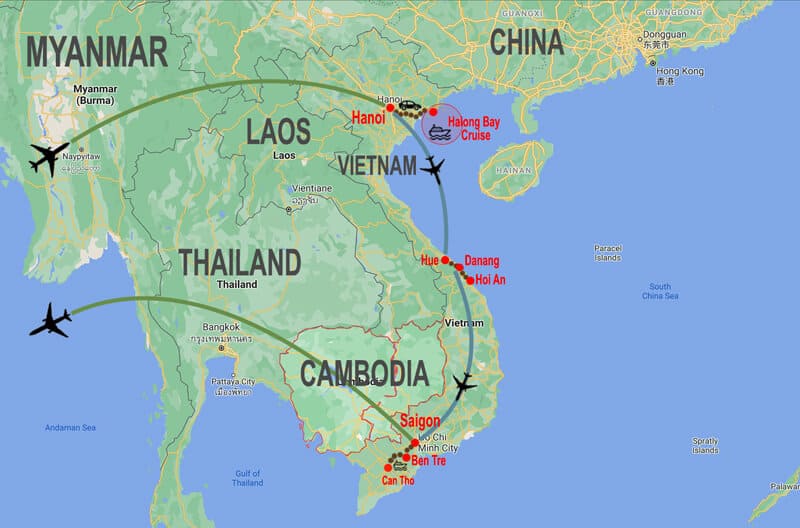 Arrival in Hanoi, the charming capital of Vietnam.
Welcome meeting by our staff at the airport and transfer to the hotel. 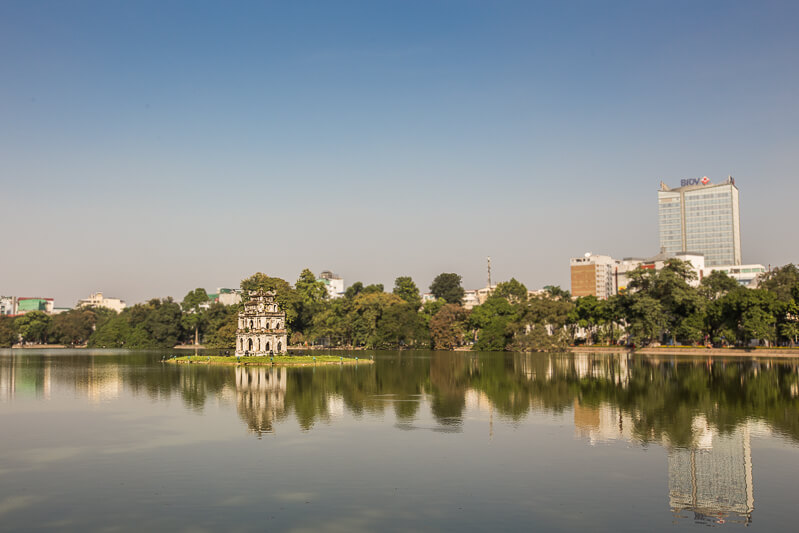 After breakfast we start our tour of the capital from the Ho Chi Minh Mausoleum, a symbolic building that preserves the remains of the famous Vietnamese President in the centre of Ba Dinh Square where the Declaration of Independence was read in 1945.

We move on to the Presidential House, built in colonial style, and the One Pillar Pagoda, the name refers to its special structure supported by a single pillar, a symbol of the purity of the lotus flower. It was built by Emperor Ly Thai Tong as a good omen for the birth of a male son who would inherit the throne.

We then travel to the West Lake, the largest natural reservoir of 4 square kilometres in Hanoi, to Tran Quoc Pagoda, the capital’s oldest Buddhist temple built in the 6th century, and to the Temple of Literature, the nation’s first university and Imperial Academy built in 1070 in honour of Confucius.

In the afternoon, we visit the Old Quarter, “Old Hanoi“, aboard a traditional cyclò as we meander through the narrow streets that criss-cross the historic centre and take their name from the type of goods sold.

We stop at Hoan Kiem Lake, also known as the ‘Lake of the Restored Sword’, and continue over the red wooden bridge The Huc that leads to the Ngoc Son temple, or ‘temple of the Jade Mountain‘. We end the day with the world-famous water puppet show. 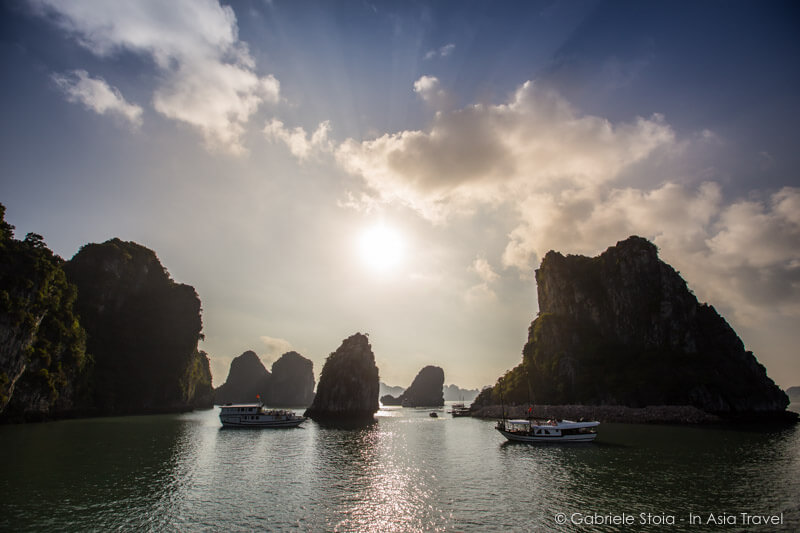 Early morning transfer to Ha Long port (approx. 4h). Upon arrival board the junk for an unforgettable cruise in Halong Bay, a UNESCO World Heritage Site since 1994 and considered one of the Seven Wonders of the World since 2008.

Stretching over an area of more than 1500 square kilometres, it is home to thousands of small monolithic limestone islands, fantastic caves and a marine biodiversity and biosystem with a wide variety of flora and fauna.

During the navigation in the beautiful naturalistic scenery of the bay you can practice some activities foreseen by the program established by the navigation company such as swimming, snorkelling, kayaking, visiting a limestone cave and a fishing village, or simply relax surrounded by the extraordinary landscape.

Both lunch and dinner are served on board and include a tasting of seafood. Overnight stay in an air-conditioned private cabin. 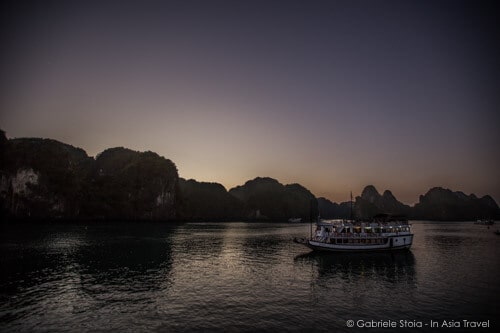 The cruise offers the privilege of watching the spectacular sunrise over Halong Bay. If you wish, you can take part in a Tai Chi class on the deck of the junk at 6am.

After breakfast, further activities are planned on board, depending on the cruise programme.

On the way back to Ha Long port, lunch will be served on board to conclude this unique experience.

Pick up at the port and transfer to Hanoi International Airport in time for the domestic flight to Huè. Upon arrival transfer to the hotel. 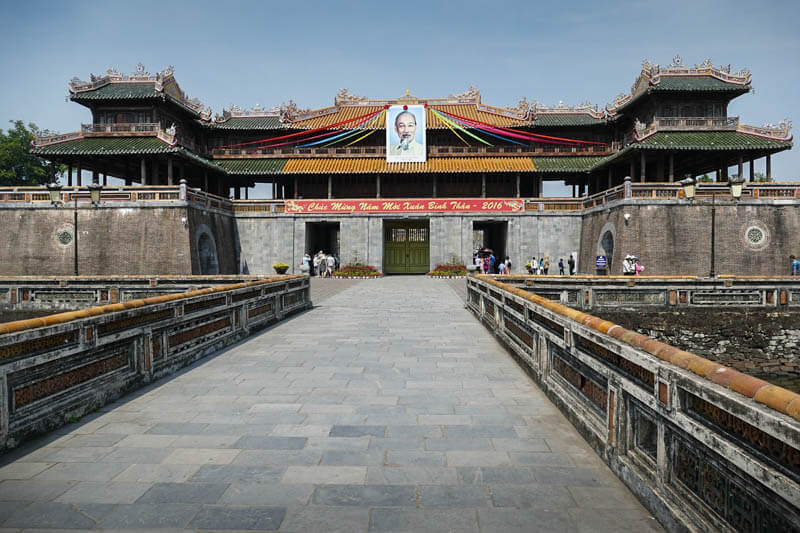 We spend the day visiting Hué, the former capital of South Vietnam in 1744 and from 1802 to 1945 during the reign of the Nguyen Dynasty.

It was founded in 1687, initially under the name Phu Xuan, along the banks of the Perfume River, which divides the city into two parts: on the left bank the Old City with the Citadel and the imperial residences, and on the right bank the New City, once inhabited by Europeans.

In 1802 it was renamed to its present name by Emperor Nguyen Anh. Hué is also known for its spectacular imperial tombs, ancient pagodas, temples and of course its fine cuisine.

We embark on a boat trip on the Huong River, better known as the Perfume River for the poetic view and fragrant aroma of the orchids that fall into the river in autumn. We visit the Thien Mu Pagoda, or “Pagoda of the Celestial Lady“, a symbol of Hué, built in the 17th century during the Le Dynasty.

We then continue to the Imperial City, the fortified palace built inside the Citadel in 1623.

In the afternoon we visit the tomb of Emperor Minh Mang, the second of the Nguyen Dynasty, and the Tu Hieu Pagoda, considered to be one of the most fascinating places of worship.

Transfer to Hoi An, the ancient mercantile hub surrounded by a variety of spectacular landscapes, featuring a range of buildings built with Chinese and Japanese artistic influences, evidence of a vibrant commercial past in the 2nd century AD. 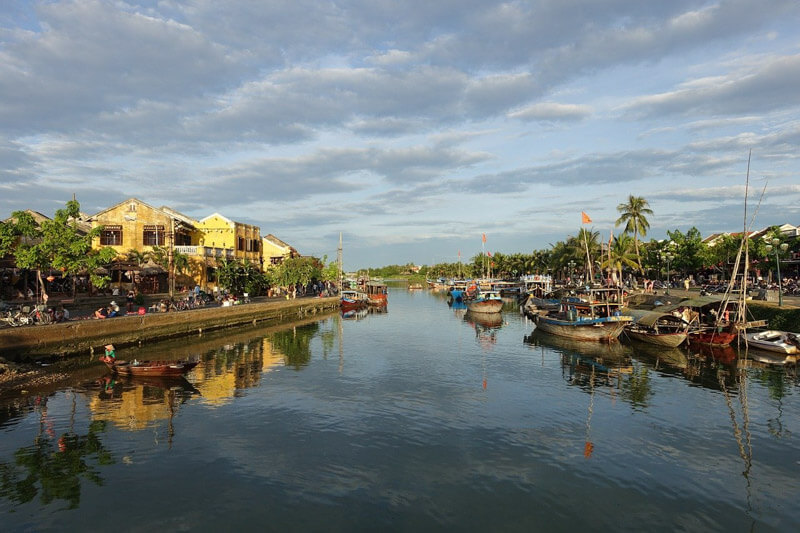 After breakfast we visit the ancient city of Hoi An, a UNESCO World Heritage Site since 1999, with its buildings that still retain the classic style and characteristics of the merchant cities of the 15th-19th centuries with Chinese, Japanese and European architectural influences.

We visit the Japanese Bridge and the adjoining Cau Chua Pagoda built at the end of the 16th century by the Japanese community.

We continue to the old Phung Hung House built in 1780, one of the finest examples of architecture in Hoi An.

We conclude the day with a visit to the Fukien Temple built at the end of the 17th century by the Fujian Chinese congregation.

Afterwards transfer to Danang airport in time for the domestic flight to Saigon. Upon arrival transfer to the hotel. 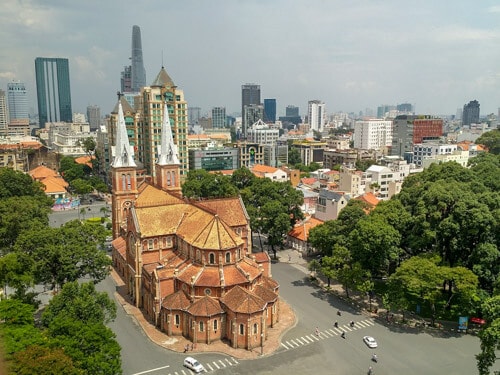 After breakfast transfer to Cu Chi, the most devastated district, bombed and poisoned by Napalm during the Vietnam War.

We visit Cu Chi tunnels, the famous underground network of tunnels that has played a crucial role in the survival of many people. The first works date back to the 1940s, when the Vietnamese began digging tunnels to escape compulsory conscription, French attacks and to keep in touch between villages. In the 1960s, the Viet Cong extended the tunnels to over 250km and since then they have become legendary during the Vietnam War.

In the afternoon we visit Saigon, the former Royal Prey Nokor capital at the time of the Khmer Kingdom, later capital of the French Colony, or Cochinchina, as well as of the Independent Republic of South Vietnam until 1976 when it was renamed Ho Chi Minh City by the homonymous leader.

Among the main highlights we visit the Post Office, built in the 19th century with Renaissance and Gothic influences, Notre Dame Cathedral built during the French colony, and the Thien Hau Pagoda, an excellent example of the Chinese architecture dedicated to the Goddess of the Sea.

We end the day with a visit to the War Museum, a permanent exhibition of the atrocities of the Vietnam War. 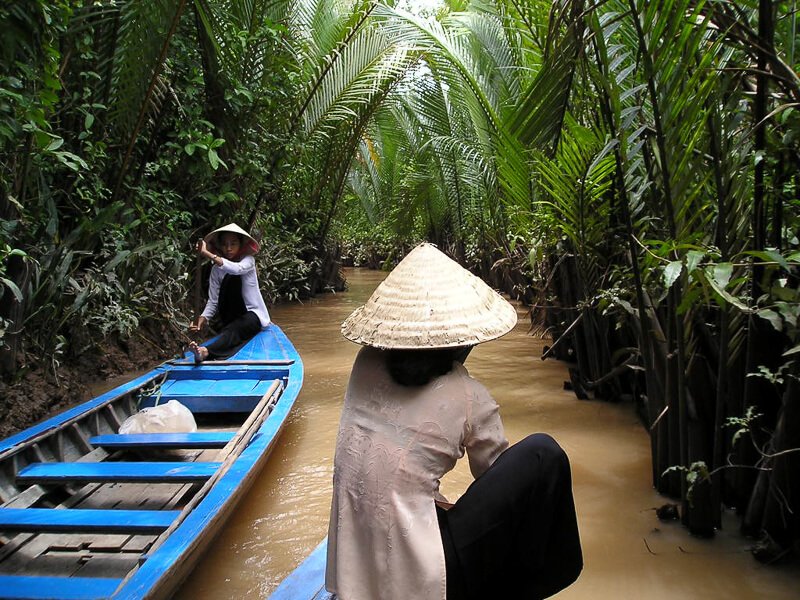 Our journey moves on to Vietnam’s southern provinces to the Mekong Delta. For thousands of years, it has played an important role, initially in trade due to its advantageous geographical position on the sea route between India and China, and today above all in the economic field, to the point that it has been named the “rice bowl of Vietnam“.

Upon arrival in Ben Tre, we visit the rural areas to learn about the daily activities that are still carried out following ancient traditions. Fishing and agriculture are without doubt the key sectors in this area. Along the way, we stop to observe some production processes that give us an insight into the lifestyle of the Mekong people.

We also stop to see a kiln used for traditional brick firing, a workshop for processing coconut and other derivative products and a weaving house where straw mats are still made by hand.

We board a sampan, the traditional wooden boat, through the narrow inlets of the Delta and dock in a village to visit a local house and taste the delicious South Vietnamese cuisine.

In the afternoon we continue cruising the canals for a special visit to the home of Mr. Khanh, a passionate collector of antiques and very special artefacts relating to the history of Vietnam, as well as original family photos from the French colonial period.

Afterwards transfer to Can Tho. 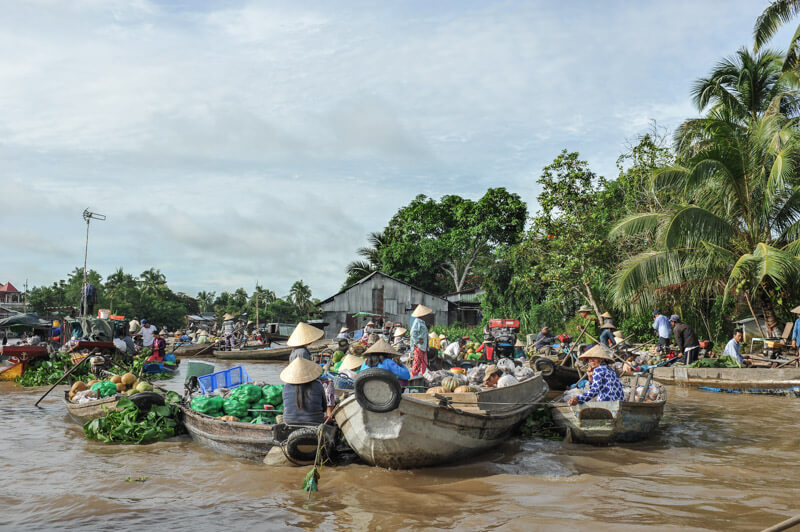 Early in the morning we visit the famous Cai Rang floating market, one of the most picturesque in the Mekong Delta. The local markets are traditionally held at dawn and are a must to admire in amazement the hard work of Vietnamese traders.

We embark at the Can Tho jetty and cruise through the crowded water bazaar, surrounded by boats of different sizes used by local traders.

Following this, transfer to Saigon airport in time for your departure flight.

Length : 9D8N
From HANOI to SAIGON 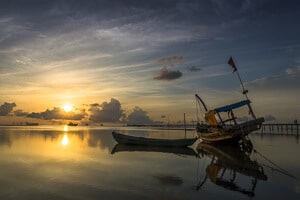 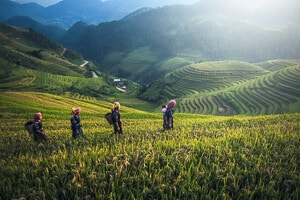