An archaeological itinerary in Uzbekistan including visits to some of Central Asia’s most prominent historical sites off the beaten track.

Explore the ruins of the ancient settlement Ak-Tepa in Yunis Abad district of Tashkent and the Buddhist Temple at Kuva in the Fergana Valley.

Visit the ancient Macedonian port city Kampyr Tepe, founded by Alexander the Great in Bactria, north of the Oxus River, and other Buddhist sites in Termez, on the Afghan border.

Discover the streets of Khiva, among the best preserved ancient historical centers in Central Asia, Bukhara and Samarkand with our history experts.

Be enthralled by the fascinating forts in the Kyzylkum Desert and immerse yourself in the rural lifestyle of the people of the Nurata Mountains. 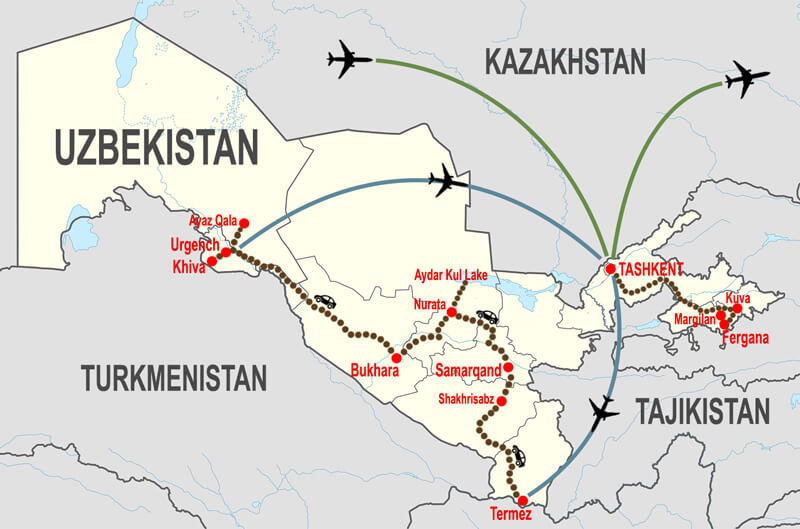 Arrival in Tashkent, the ancient trading oasis, today the eclectic capital of the Uzbek Republic. Artifacts found at various excavation sites are evidence of the ancient origins and settlements of the city.

We visit the ruins of the ancient Ak-Tepa settlement in the Yunis Abad district. According to archaeological research, it housed the oldest Zoroastrian temple of its time. Next, we head to the Ming Urik site – the ancient settlement at the heart of the present capital, and to Kanka, the former hub of the Tashkent oasis in the Akhangaran valley.

After breakfast transfer to the Fergana Valley, through Kamchim Pass towards the Kyrgyzstan border.

We stop at Kuva to visit the ruins of the Buddhist Temple.

Archaeological excavations have brought to light fragments of monumental sculptures, including statues of various deities of a Buddhist pantheon, confirming the diffusion of Buddhism in this area.

Afterwards, transfer to Fergana and check-in at the hotel.

We continue our journey to Margilan, the town in the Fergana valley which, according to some European legends, was founded by Alexander the Great. It was a key stop on the Silk Road along the route through the Alay mountains to Kashgar in China.

Visit to the Akhmad Khidji madrasa and the Yodgorlik Silk Factory known worldwide for its sublime silk manufacture. The fame acquired over the centuries has granted Margilan the full-fledged nickname of the ‘Silk Capital of Central Asia’.

Visit to the Kumpeta bazaar and to Rishtan, one of the most famous and oldest pottery towns in Uzbekistan, with traditions handed down from generation to generation for over eight centuries. The town owes its fortune to the substantial deposit of clay at the base of most of the town area. Afterwards, transfer to Tashkent.

Transfer by domestic flight to Termez, one of the oldest cities in Asia, located in Bactria on the border with Afghanistan, in the Hellenistic kingdom at the eastern end of Alexander the Great’s Empire.

Transfer to Kampyr Tepe, the ancient Macedonian port city of Bactria north of the Oxus River, founded by Alexander the Great in the 4th century BC. It was once a terminal for traders on the Silk Road. The archaeological site is considered one of the oldest in Uzbekistan and the ruins consist of Hellenistic-style fortifications, a residential area, commercial suburbs and a port.

We continue to Dalverzin Tepe for a visit to the ruins of the city of Khalchayan, the archaeological site thought to be a small palace or reception hall, located near the modern city of Denov. 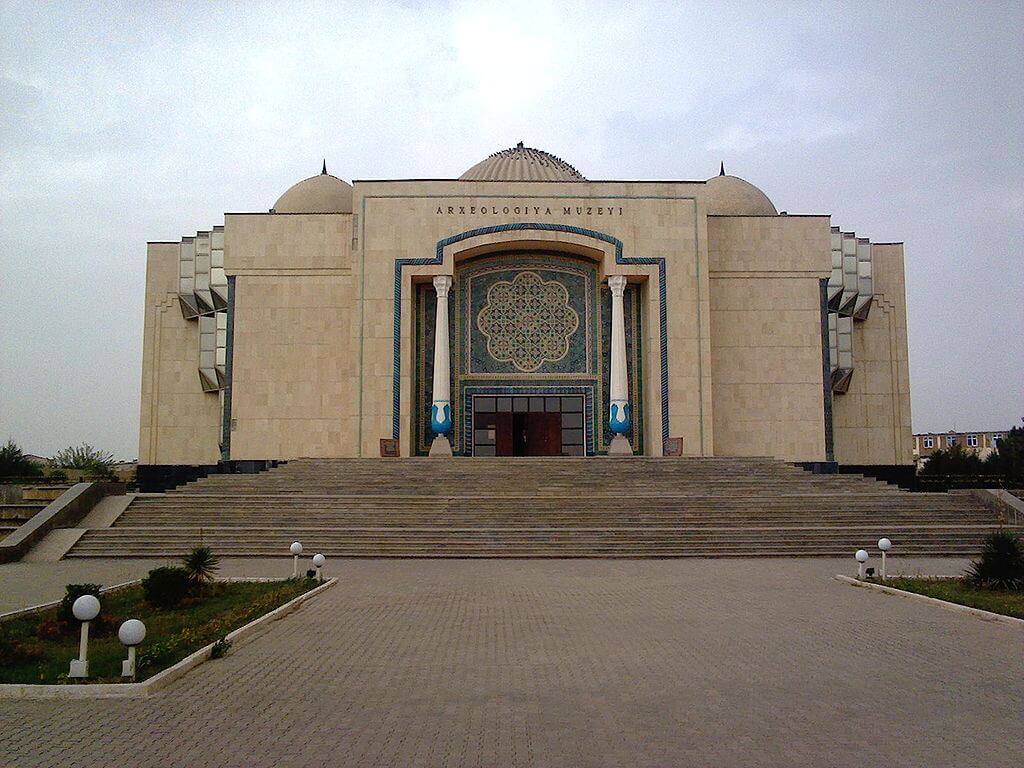 Visit to the Sultan Saodat Palace built between the 11th and 17th centuries and according to some direct descendants of the Prophet Mohammed, over the tomb of the Sayyids of Termez. Further on we visit the Zurmala Buddhist stupa situated in the ruins of ancient Termez, built in the 1st-2nd century BC.

On to the impressive Kara Tepe Monastery, a Buddhist place of worship built on three hills, consisting of a series of temples and monasteries dating from the 2nd century AD, a combination of caves carved into the sandstone and surface buildings of unfired brick. Nearby is the unique Buddhist building Fayaz Tepe.

Visit to the 11th-15th century Hakimi Termizi architectural complex, named after the renowned author of numerous religious philosophical works, theorist of Islamic mysticism and founder of the Dervish order.

We end the day at the Archaeological Museum whose artistic heritage is unique throughout Central Asia. It houses 27,000 exhibits including everyday utensils, weapons, coins, paintings, ancient sculptures, correspondence between rulers, 16,000 books and medieval documents.

Transfer by car to the Kashkadarya region to visit Shakhrisabz, birthplace of the famous conqueror Tamerlane.

We visit the iconic Registan Square, home to some of the world’s finest examples of Islamic architecture, dominated by the impressive Sher-Dor, Ulugbek and Tilla-Kori madrasas.

Visit the ancient observatory of Ulugbek built in 1420 by the Timurid astronomer Ulugh Beg, considered by scholars to be one of the best in the Islamic world.

We continue to the ruins of Afrasiyab, one of the largest historical sites in the world, destroyed by the Mongols in the 13th century. Close by is the Afrasyiab Museum, which has a rich permanent display of the city’s history.

In the afternoon we head to Nurata. Flint quarries, mines, ancient settlements, burial mounds, cemeteries of ancient nomads, pagan altars, crypts and some 4,000 petroglyphs, including monuments from the Middle Ages, the Iron Age, the Bronze Age and even the Stone Age, can be found in the area.

After breakfast we hike through the area with an experienced local guide. We visit the ruins of ancient houses built of flat stones on steep mountain walls.

Moving along the gorge we reach a small waterfall where we can take a relaxing break and observe the petroglyphs.

Afternoon transfer to Bukhara, once the intellectual and cultural centre of the Islamic world, and a flourishing city on the Silk Road, which has hardly changed since the days of the merchant caravans.

After breakfast transfer to Paykent for a visit to the ruins of the fortress brought to light in 2003. Afterwards, return to Bukhara.

This afternoon we visit the historical centre of Bukhara at the Ark citadel, the massive fortress built in the 5th century for military purposes and used as the residence of the royal courts until 1920.

We continue to the Po-i-Kalyan religious complex overlooking the iconic square dominated by the Kalyan Mosque, the Miri-Araba Madrasa and the Kalyan minaret, symbol of Bukhara, used for centuries as a beacon to guide the caravans arriving from the desert.

Continue to the Chor Bakr necropolis, the Samanid mausoleum, the oldest funerary building in Central Asia and an icon of early Islamic architecture.

After breakfast we head northwest across the Kyzylkum Desert and the Amu Darya River.

Although the route is long, it gives us glimpses of a mythical landscape, once travelled by merchant caravans on the Silk Road.

After breakfast visit the Ayaz Qala fortress which stands on a hill overlooking the Kyzylkum desert, built in the 2nd century AD by the Kushan Empire and probably part of a chain of fortresses guarding the desert borders.

Interesting residential structures can be found within the surrounding walls.

Next up, visit the impressive fortresses Toprak Qala and Qavat Qala.

Afterwards transfer to Khiva, the most remote of the caravan cities on the Silk Road, considered one of the best preserved ancient historical cities in all of Central Asia.

We spend the day exploring Khiva, an open-air museum that carries us back in time for centuries to the period of the merchant caravans on the Silk Road.

After dinner a short domestic flight to Tashkent.

Free time for a final stroll through the capital or to go shopping in the exotic and colourful Chorsu Bazaar market surrounded by the scent of spices, dried fruits and delicious Uzbek bread.

Afterwards, transfer to the international airport in time for your departure flight. 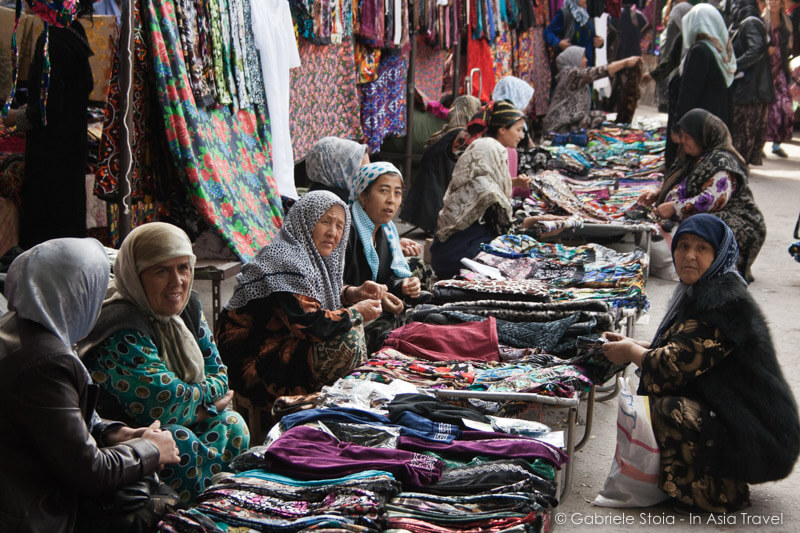