Bangkok and Krabi is a classic itinerary covering the most important cultural sites with a beach extension to the gorgeous tropical island of Krabi.

Explore the Grand Palace, the building complex at the heart of the capital, and the main temples Wat Pho, Wat Phra Kaew and Wat Traimit.

Immerse yourself in the chaotic and picturesque Damnoen Saduak floating market and the Umbrella Pull-down Market built on railway tracks.

Relax on the stunning beaches of Krabi on the west coast of southern Thailand, popular for its gorgeous offshore islands and dense mangrove forests.

This itinerary can be customised according to your travel needs and can be combined with other routes.

Arrival in Thailand, the “Land of Smiles“. Welcome meeting by our staff at Bangkok international airport and transfer to the hotel.

Our tour continues with the visit to the Grand Palace, the building complex at the heart of the capital, official residence of the monarchs of the Kingdom of Siam since 1782, followed by the Wat Phra Kaew, also known as the Temple of the Emerald Buddha. Built in 1783 within the perimeter of the Grand Palace, it is considered the most sacred Buddhist temple in the country.

We then proceed to the Chinatown district, one of the liveliest and most colourful areas of the capital. Visit Wat Traimit, or the Temple of the Golden Buddha, which houses the largest solid gold statue in the world weighing 5.5 tonnes and 3 metres high.

Return to the hotel. The afternoon is free at your leisure.

Upon arrival we embark on a traditional boat to explore the artificial canal built over 150 years ago and its remarkable floating market, where vendors on small wooden boats sell a variety of local products such as Thai snacks, vegetables, colourful fruits, desserts and handicraft items.

Over the years, the floating market has become a popular tourist attraction. Nonetheless, it is such a characteristic slice of day-to-day life that it is worth a visit.

Next, we visit the Maeklong Railway Market, also known as the Umbrella Pull-down Market, the most picturesque and authentic Thai market built in 1905 literally on railway tracks still in use today. At the time, the local authorities decided to build this railway line to transport goods quickly. Today, eight times a day, when traders hear the approaching train, they remove goods and parasols from the rails with astonishing rapidity to enable the train to pass. Right after that, they reset everything and carry on selling until the next train ride.

Free morning at your disposal to relax or to stroll around Bangkok city.

Afterwards, transfer to the domestic airport in time for the flight to the wonderful Krabi, on the west coast of southern Thailand, popular for its gorgeous offshore islands and dense mangrove forests.

Welcome meeting at Krabi airport and transfer to the hotel.
The rest of the day is free. 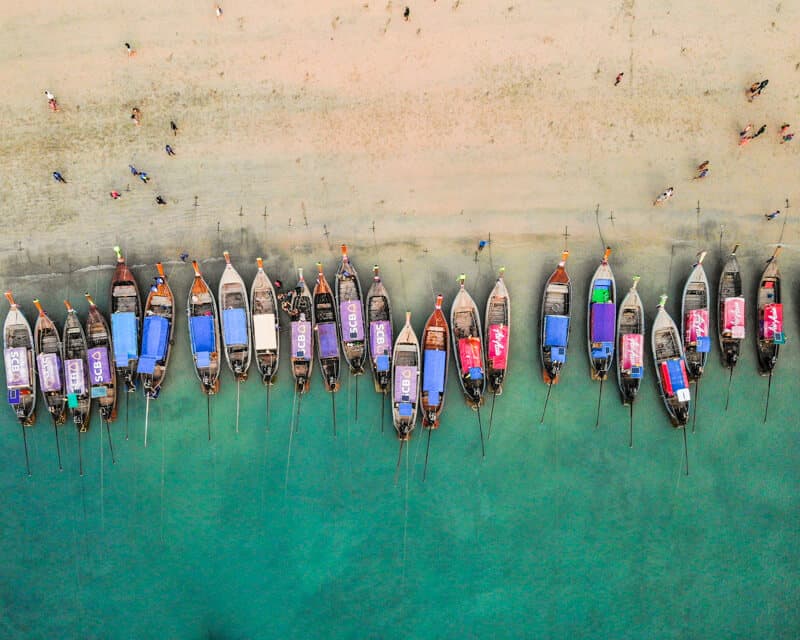 Transfer to Krabi airport in time for your departure flight to Bangkok.

Included : Breakfast, domestic flight and private transfer to the airport