THE BEST OF LAOS

The Best of Laos itinerary is a classic and comprehensive 10-day tour that combines top attractions with outstanding cultural visits as well as nature experiences, travelling from Luang Prabang to the far south of the country.

Visit Luang Prabang, ‘City of the Golden Buddha‘, the legendary capital of the Lan Xang Kingdom, located on the peninsula at the confluence of the Mekong and Nam rivers, a UNESCO World Heritage Site since 1995.

Visit Phonsavan and the ‘Plain of Jars‘, the large archaeological site with hundreds of large jars scattered over the plateau, and Vientiane, the quiet capital of Laos on the banks of the Mekong River.

Explore southern Laos for an unforgettable nature experience at Plateau Bolaven, the incredible Tad Fane, Li Phi and Khone Papheng waterfalls, as well as Don Khong and Don Khone in the ‘4000 Islands‘ area.

This sample itinerary starts in Luang Prabang and ends in Pakse. It can be customised to suit your travel needs or combined with other trips in Laos, as well as an overland trip to Cambodia. 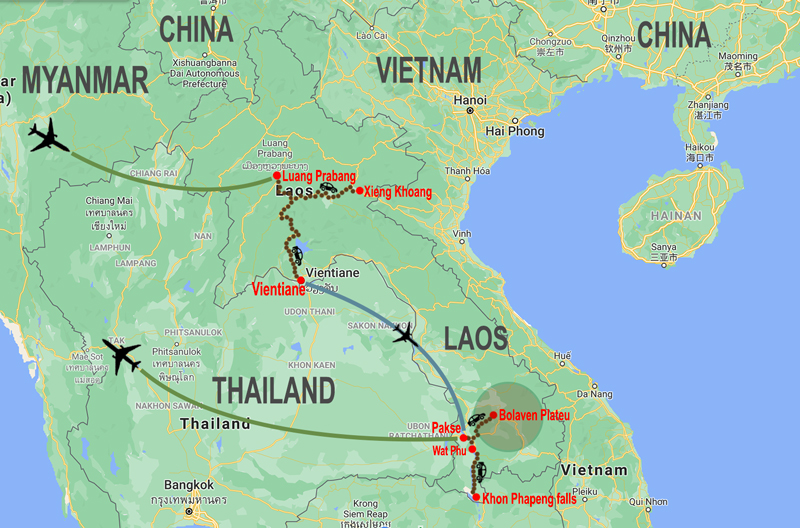 Welcome meeting by our staff upon arrival in Luang Prabang, the ancient capital of the Lan Xang Kingdom located on the peninsula at the confluence of the Mekong and Nam rivers, UNESCO World Heritage since 1995, whose origins date back to the ancient city Muang Sua built in 698. Transfer to the hotel and check-in.

In the afternoon begin our walking tour of the most important monuments.

We visits Wat Visoun, built in 1513, Wat Aham, or ‘Monastery of the Blossoming Heart‘, built at the beginning of the 19th century as a place of meditation and a meeting place between animist and Buddhist cultures, and the Wat Mai, ‘New Monastery‘, built at the end of the 18th century, one of the most complex and picturesque temples in the city, richly decorated and easily distinguishable by its unique five-level roof.

Late in the afternoon we climb Mount Phousi to visit the sacred golden stupa and admire the beautiful city skyline and a romantic sunset over the Mekong.

A walk to the Night Market on Luang Prabang’s main street in the evening is definitely worthwhile, as you can meet local traders selling handicrafts from the area’s ethnic minorities. 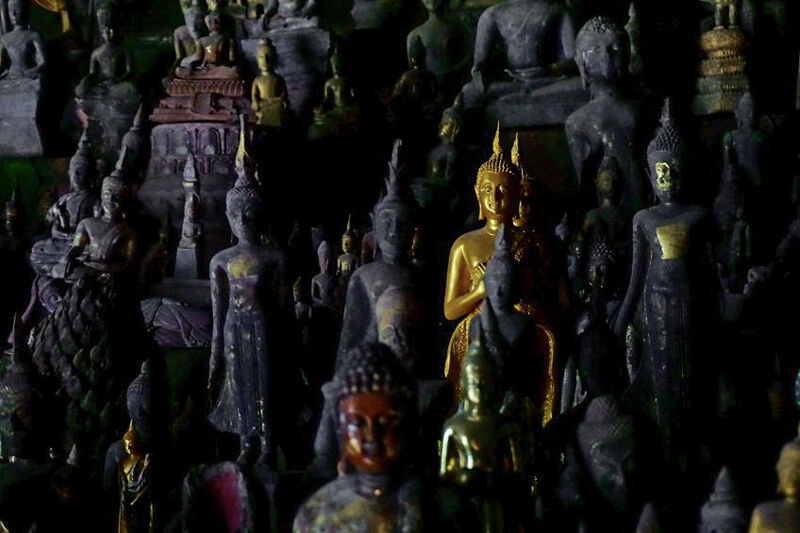 After breakfast we continue to Wat Sene Souk Haram temple, or ‘Temple of 100,000 Treasures‘, built in 1718 using 100,000 stones extracted from the Mekong River, and Wat Xieng Thong, or ‘Monastery of the Golden City‘, founded in 1560, one of the most important in Luang Prabang, known for the grace and elegance of its architecture.

During the cruise we admire the typical Laotian rural landscape and the local lifestyle. 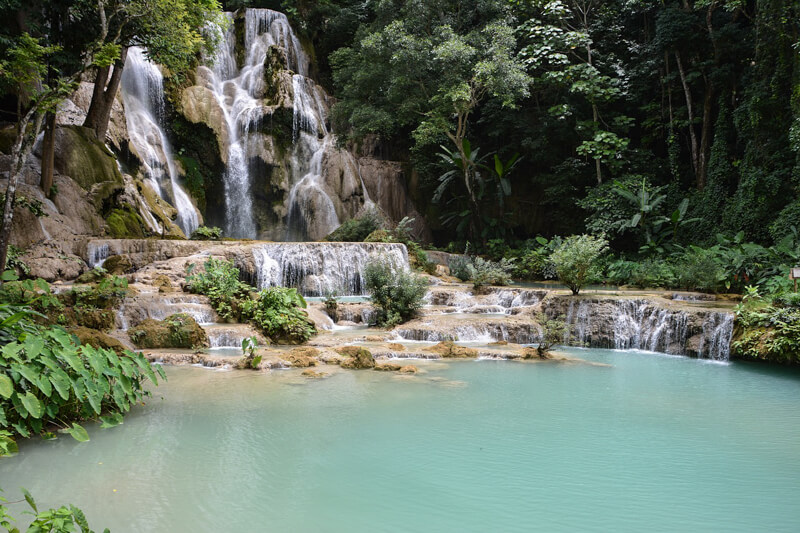 Once finished, we return to the hotel for breakfast.

After breakfast we continue to the Phousi market and the ethnic villages Ban Ouay (H’mong tribe), Ban Ou (Laoloum tribe), Ban Thapene and others inhabited by the Khmu ethnic group.

We then hike to the beautiful Kuang Si waterfalls with some stops along the way at additional tribal villages.

A natural basin upstream and a steep slope create this natural wonder, which is spread over 3 levels, with the upper level having a 60-metre drop. Several natural pools are formed in the valley, offering a compelling opportunity for a refreshing dip in the turquoise waters.

Near the waterfalls you can take a walk on the trails through the forest and the villages of the Hmong and Khmu ethnic minorities.

We end the day with a beautiful sunset from the top of the Wat Phabath temple. 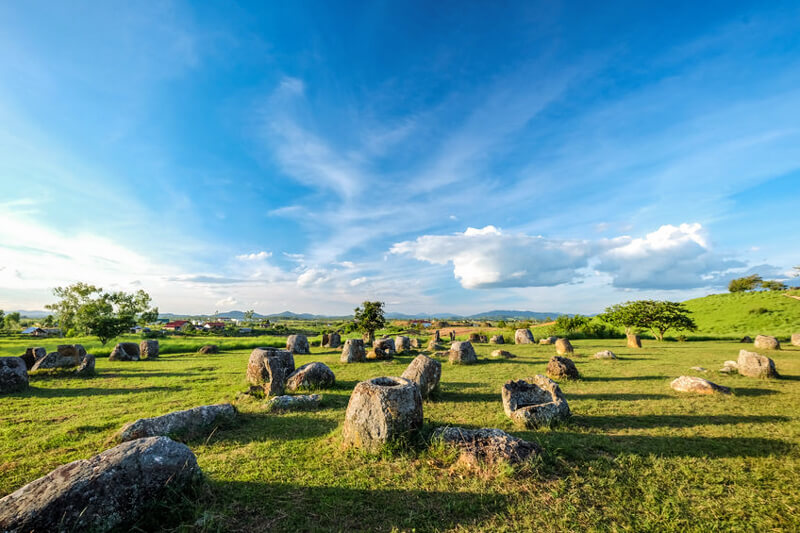 After breakfast we head to the National Museum: formerly the Royal Palace, it now houses an important collection of valuables including statues of Buddha and many other objects donated by visiting dignitaries to the court of Luang Prabang. We continue along the quiet streets lined with buildings from the French colonial period to admire their architecture and learn about their original function.

Next, we travel to Xieng Khoang, the province heavily affected by the American bombardment during the Second Indochina War (Vietnam War).

The path is very enchanting and reflects the authenticity of Lao landscapes. It is unusual to come across other tourists in this area as it is still off the beaten track. The transfer is slightly long and includes a few stops to admire and take pictures of the scenery.

We reach the Plain of Jars, the large archaeological site with hundreds of large jars scattered over the plateau.

Archaeologists claim that the jars are around 2,000 years old, although no concrete explanation has yet been found as to what they were used for, whether they were burial urns or were merely used to store the popular rice wine. 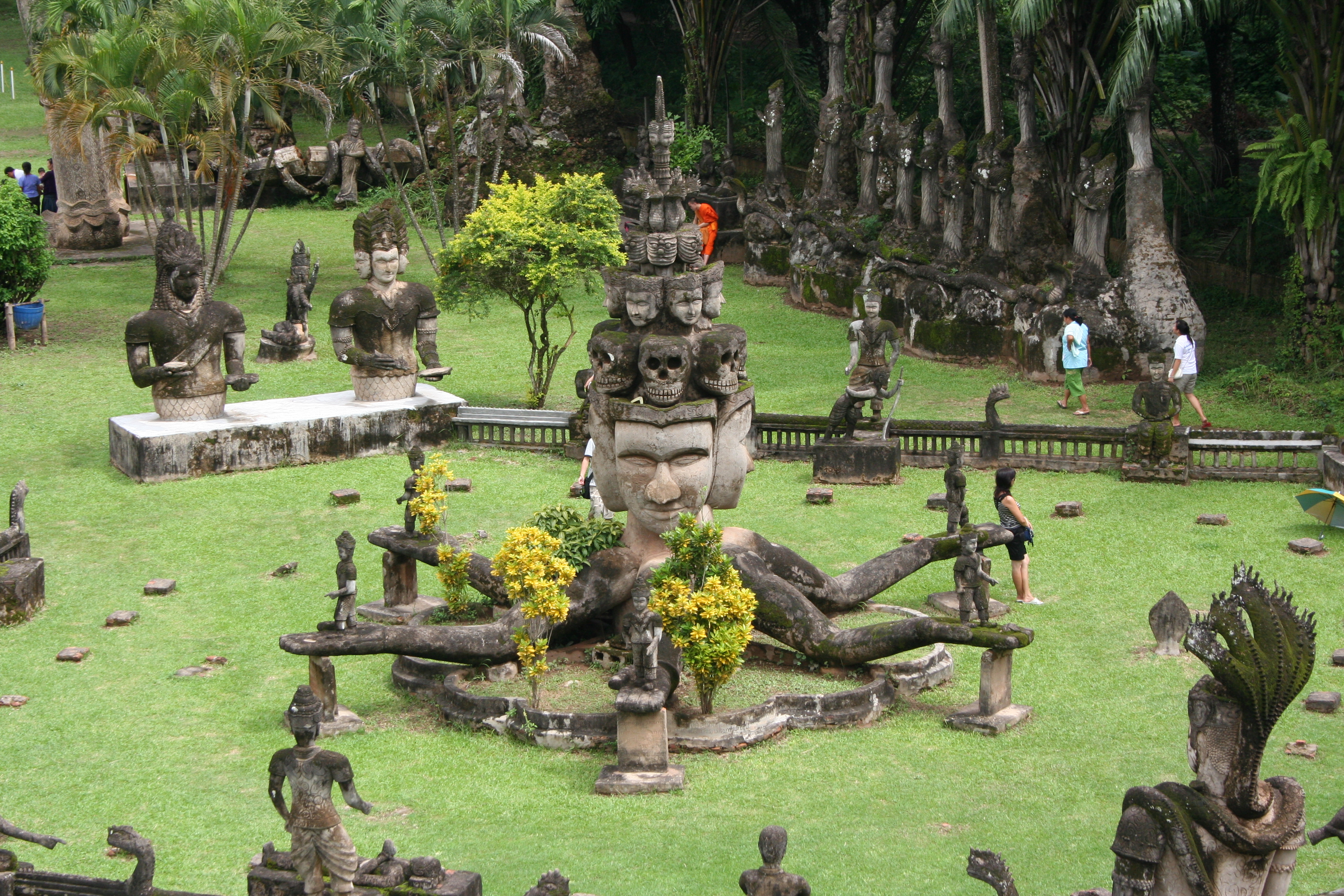 After breakfast we visit the colourful market of Phonsavan.

Afterwards we transfer to Vientiane, the quiet capital of Laos on the banks of the Mekong River.

Afternoon transfer to Wat Xieng Khouan, also known as ‘Buddha Park‘. In 1958 the Buddhist-Hinduist cleric Boun Léua created numerous sculptures inspired by the Buddhist and Hindu religions, with the aim of ‘uniting’ the two beliefs through a work of art.

The 40-metre-long statue of the reclining Buddha and the large hollow sculpture in the shape of a head, which provides access to an upper level with a beautiful view of the park, symbolising the passage from hell to heaven, are particularly noteworthy.

Afterwards we get back to the city in time for the spectacular sunset over the Mekong River. 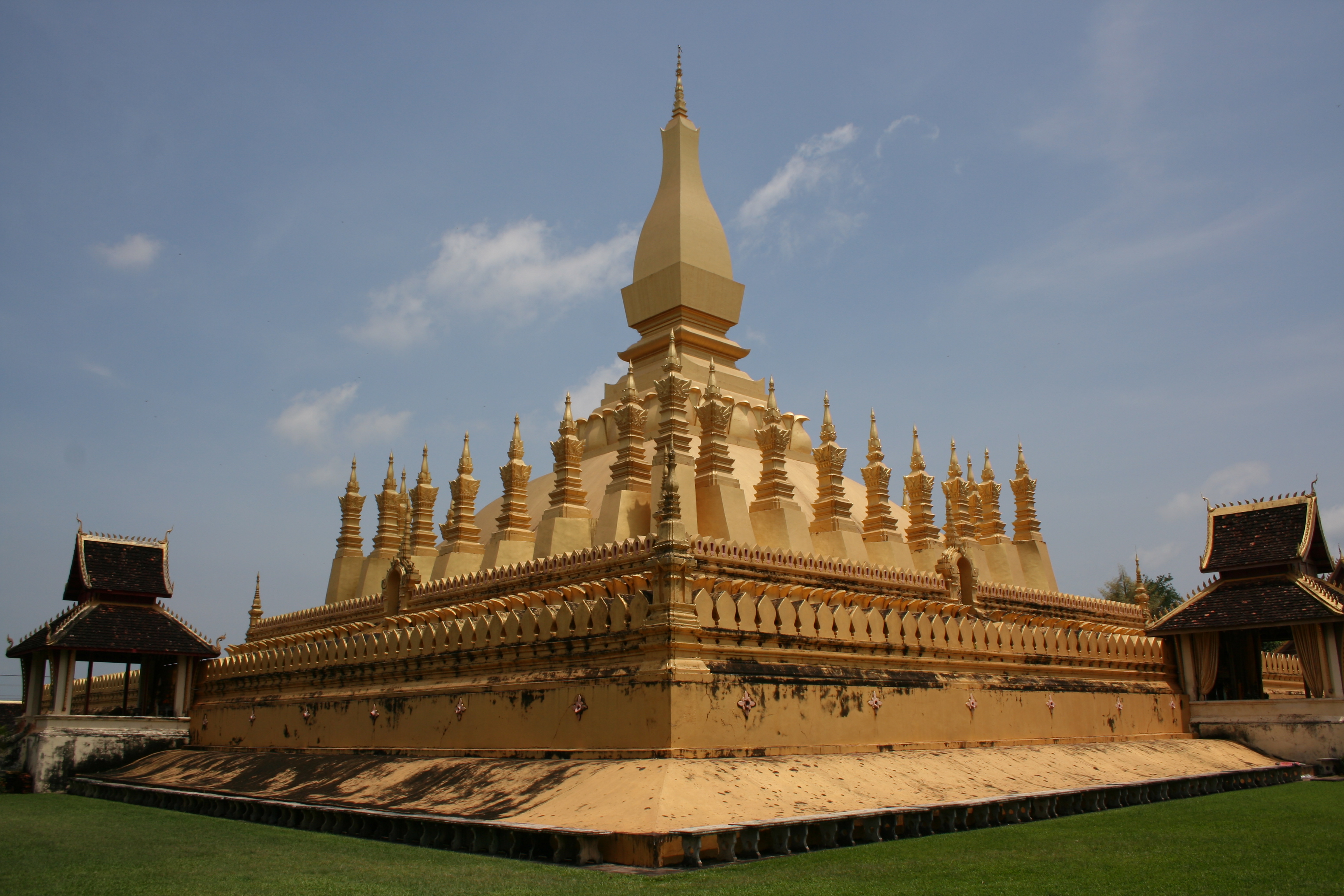 After breakfast we visit the most significant landmarks such as Wat Si Saket, known for its thousands images of Buddha that, according to local belief, protected the temple during the Siamese invasion of 1828.

We continue to Wat Ho Prakeo, built in 1865 to house the famous Emerald Buddha, and to That Luang Stupa, considered the most important monument in Laos. The latter, according to local belief, houses a relic of the Buddha brought over in the 3rd century BC.

We conclude our visits to Vientiane at the Patuxai, or ‘Laotian Gate of Triumph‘ the monument dedicated to the fallen of all wars.

In the afternoon we continue the visits on foot to the temples Wat Ong Tue, Wat Inpeng and Wat Haisok. 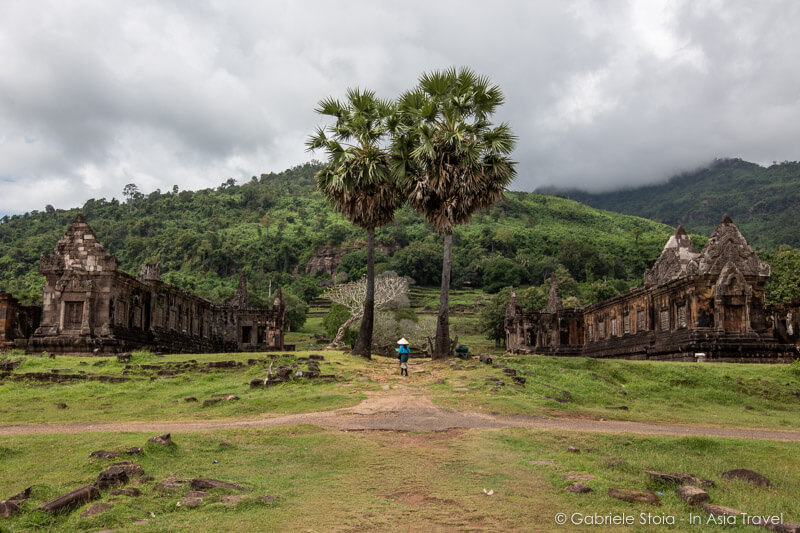 After breakfast transfer to the airport for the domestic flight to Pakse, the former capital of the Champasak Kingdom, today the provincial capital as well as the second largest and most populous city in Laos.

On arrival transfer to Champassak to visit the ruins of Wat Phu Temple, at the base of Mount Phu Kao. The temple was built as early as the 5th century, during the pre-Angkorian period, however, most of the ruins visible today date back to the 11th and 13th centuries, during the Angkorian period.

Compared to other temples of the same period, the structure is developed according to a unique architecture, evolving towards the top of the mountain and ending with a sanctuary dedicated to the deity Shiva. Wat Phu Temple has been a UNESCO World Heritage Site since 2001.

In the afternoon we carry on south to Si Phan Don, the area better known as the ‘4000 Islands‘, which corresponds with the widest point of the Mekong river bed, with a maximum of 12 km during the rainy season.

This site is called “4000 islands” because thousands of islands of different sizes surface during the “dry” season (November to May) as the water level of the Mekong decreases.

Upon arrival we head to Don Khong Island. Plenty of free time to explore the surroundings at your pace. 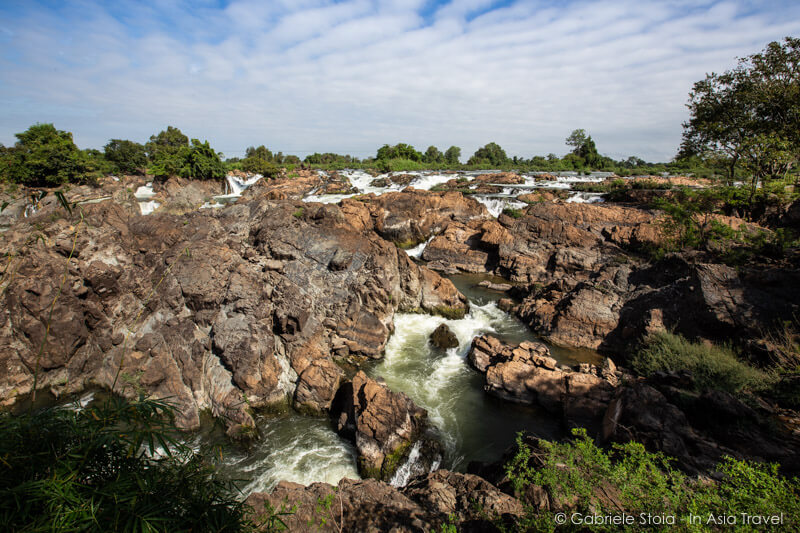 After breakfast we travel to Ban Khone village on Don Khone Island.

Several references and artefacts from the French Indochina period are visible in the area, such as some dwellings and an original locomotive from that period on a section of the old railway built for commercial purposes with the aim, though never achieved, of reaching China by bypassing the rapids of the Mekong River.

Next, we travel to Li Phi Falls, also known as Samphamith Falls, which mark the natural border between Laos and Cambodia.

In the afternoon we continue by boat to Ban Nakasang jetty and drive south to the Khone Phapeng waterfalls, the largest in Southeast Asia.

Afterwards, we return to Done Khong Island for an overnight stay. 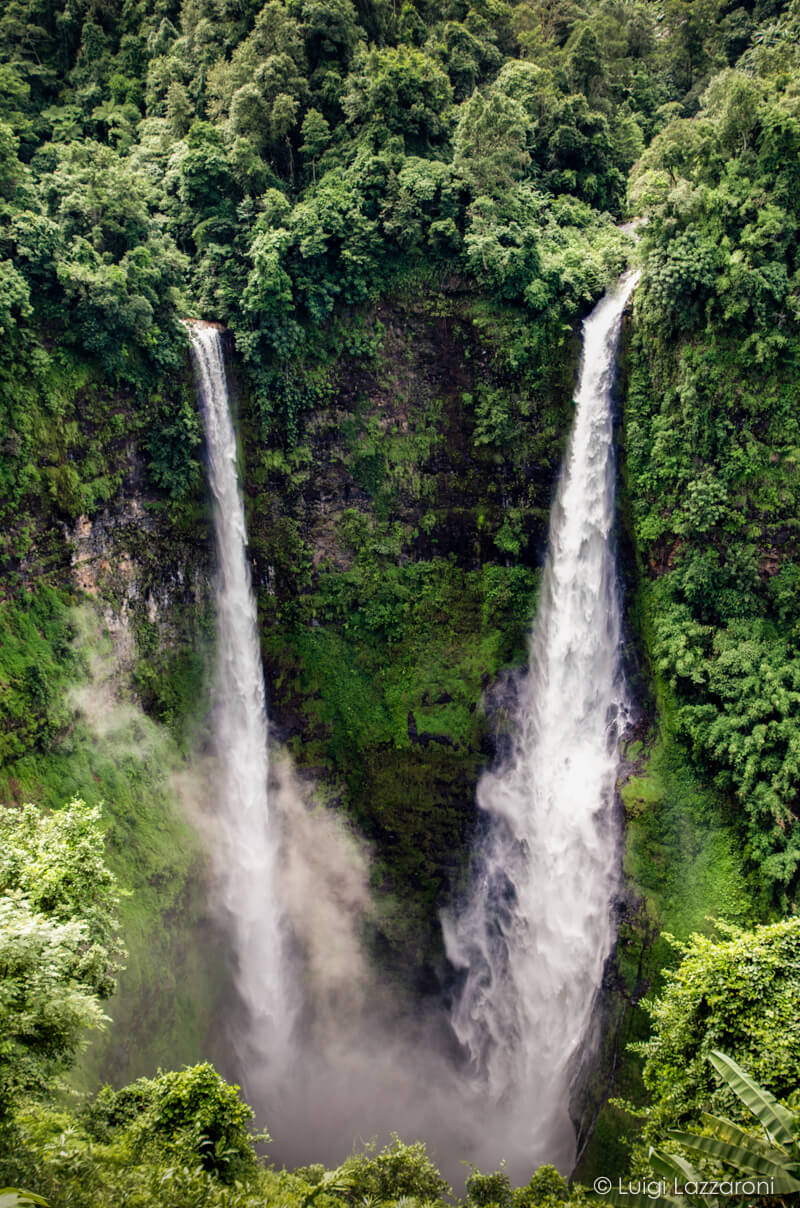 Morning transfer to Plateau Bolaven, situated between the Annamite Mountain range and the Mekong River, crossed by numerous rivers and framed by a picturesque natural landscape of forests, coffee, tea, cardamom and banana plantations as well as dozens of waterfalls.

The name Bolaven comes from the Laven ethnic group that has historically dominated this area. At an altitude of 1,000 to 1,350 metres above sea level, the plateau welcomes us with cooler temperatures than the rest of the country.

Following this, we visit the incredible Tad Fane waterfalls in the natural setting of the Dong Hua Sao National Protected Area near the village of Ban Lak.

The Champee and Pak Koot rivers flow off the plateau and come together here to create the two branches of the waterfall which, with a 120-metre drop, fall over the steep cliff creating what seems to be an endless flow of water.

In the afternoon we head to Tad Lo village where we visit the famous Tad Lo waterfalls. The area is inhabited by several ethnic minorities, including Alak, Nge, and Katu.

Transfer to Pakse airport in time for your departure flight.

This itinerary can be extended into Cambodia by crossing the Don Kralor land border. 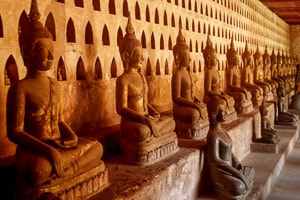 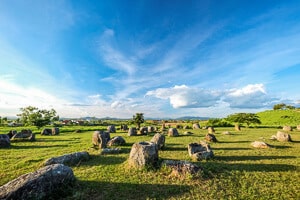 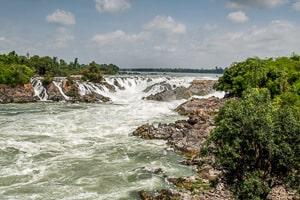 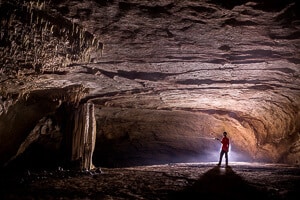 Length : 18D17N
From LUANG PRABANG to PAKSE
(or continue to Cambodia)