Of all the Central Asian countries, Uzbekistan is the most central of all the “-stans,” a position that today, as in the past, with the New Silk Road, puts it at the heart of a busy network of trade and infrastructure. The ancient caravans of goods brought on the back of camels have been replaced by modern railway lines, while the markets of Bukhara and Samarkand keep seducing the traveler with the very same atmosphere that greeted Marco Polo about 8 centuries ago. This territory, with rich river valleys and plains, deserts and mountains, for thousands of years devoted to agriculture and trade, has been part of legendary empires such as the Persian (6th century BC) and Macedonian, to find itself in the Middle Ages at the heart (once again!) of a dense network of trade between East and West.

Cinnamon and pepper, cloves and silk coming from the Far East were brought by land from Uzbekistan to the coasts of the Black Sea and from here, loaded on board of Genoese and Venetian ships, they reached the major European cities. As a result, Uzbekistan flourished and cities like Bukhara, Samarkand and Khiva acquired a legendary aura, the outcome of unimaginable riches and legendary promises. It was in Bukhara that Avicenna, one of the most famous physicians of the past, was born in the 10th century AD, while Chorasmia, south of the Aral Sea, was the birthplace of the father of modern algebra, the mathematician al-Khwārizmī. We could go on quoting Al-Biruni, one of the most famous astronomers of his time, who 500 years before Copernicus established the rotation of the earth around the sun, calculating also, with a gap of 20 Km, the distance between our planet and the moon.

It is following suggestions of this kind that we wrote an article on what to see in Uzbekistan, touching the ruins of ancient fortresses, approaching with amazement the historical center of Khiva and losing patience among the sellers of carpets and goods in the markets of Samarkand. A trip to Central Asia to get to know the best that Uzbekistan has to offer for the traveler seeking unusual itineraries and ancient charms.

Trip to Uzbekistan: what to see

When you first visit the capital of Uzbekistan, you might be surprised by the erratic traffic and the amount of people roaming the city streets. A first impression confirmed by the role of Tashkent as the main transport hub of Central Asia. Yet this ancient urban center developed around the oasis of Ming-Uruk, today in the heart of the city, also offers unexpected meetings with traditionally dressed peasants transporting goods to the capital’s various bazaars; vast green areas built during the Soviet era; and a maze of mud houses in the oldest part of the city.

Among the main attractions of a tour in Uzbekistan, the capital Tashkent is worth a stop of a few days to fully appreciate the Old City with its maze of alleys, the Chorsu bazaar, the most famous farmers’ market of the capital and some interesting madrasas including those of Kulkedash and Barak Khan. The first located on a hill overlooking the market of Chorsu, the second, with its distinctive colored domes, was built in the 16th century. It’s hard not to notice the Television Tower, with its decidedly unattractive silhouette, but offering an exceptional view of the city. For a stroll away from the traffic we recommend Novoi Park, the largest in Tashkent, while for those who want to get an idea of the history and ancient artifacts of Uzbekistan a visit to the People’s Historical Museum and the Fine Arts Museum is essential.

The imposing walls of the Old City of Khiva must have made quite an impression on European and Asian merchants along the Silk Road. Over 10 meters high and made of mud, like most of the ancient buildings, they trace the rectangular perimeter of the ancient city, the first Uzbek site to be recognized as a World Heritage Site. Today, you can feel the same astonishment if you are lucky enough to cross the gates of the Itchan Kala (Old City) which protected the ancient city until 1873, when it was conquered by the Russian army led by General Konstantin von Kaufman. What is now considered one of the most astounding archaeological and historical sites in Central Asia was once a thriving slave market and one of the main trading centers along the Silk Road.

You might decide to leave out the Aral Sea or the Fergana Valley, but on our top must-see list of Uzbekistan, the ancient city of Khiva is worth a stop of at least a couple of days. Photography enthusiasts will be thrilled, the sunset colors of the mud walls are outstanding, while the passion for art and history is amply satisfied by over 50 monuments and more than 200 historical buildings [1]. In Khiva’s Itchan Kala, the ancient fortress of Kunya Ark has dominated the city since the 12th century with its open-air throne room from which rulers dispensed judgments. The unfinished minaret of Kalta Minor, with its squat form reminds us that even the wishes of rulers must take death into account, while the caravanserai of Allakuli Khan is evidence of the key role that Khiva played along the ancient trade routes. Many have called it a museum city, an unforgettable journey back in time.

From Khiva the caravans carried on their journey eastwards towards Bukhara, another important junction along the Silk Road and for many centuries one of the most famous religious and cultural hubs of Central Asia. The brothers Matteo and Niccolò Polo, the first father and the latter uncle of the famous Marco, lived in the city of Bukhara for 3 years before moving on to the court of the Great Khan. The historical importance of the city is reflected in its historical center that today, as in the past, retains an intimate and cozy atmosphere, with its beautiful madrasas, the Ark fortress (fifth century AD), the mausoleum of Ismail Samani, the oldest in Central Asia and countless other places of historical and architectural heritage.

Strolling through the streets of Bukhara is a travel experience that is hard to replicate in other parts of Asia. The ancient capital of the Samanid state retains most of its 200 or so historic buildings intact, enabling the traveler to get a glimpse of how life used to be in one of the most important commercial and political hubs along the Silk Road. The blue-tiled madrasa of Ulugbek is the oldest in Central Asia, while Ark Fortress, a real city within a city, was continuously inhabited from the 5th century until the early decades of the 20th century. The famous mausoleum of Ismail Samanireminds us of the engineering skill of its builders, as it has never been restored since the 10th century. On the list of what to see in Uzbekistan, Bukhara is a must-see, to capture the authentic atmosphere of the ancient merchants along the Silk Road. 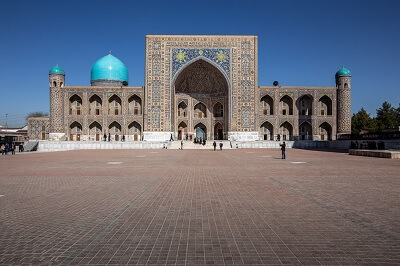 Registan (Old City) is the historical heart of Samarkand, one of the oldest cities in Central Asia. Its foundation dates to the 5th century B. C. The city was conquered by Alexander the Great, destroyed by Genghis Khan, rebuilt by Tamerlane who made it a rich capital, one of the most famous cultural centers of Asia and one of the main markets along the Silk Road. In the Middle Ages Samarkand and its riches attracted merchants and adventurers, consolidating until today the legendary aura of the city. A mythical place that, despite the urban follies of overly creative professionals, seduces and attracts, as it once did, travelers coming to discover the treasures of Samarkand’s Registan.

When the army of Genghis Khan arrived here, he plundered Samarkand of all its riches, razed the buildings and killed most of the population. The three imposing buildings forming the Registan of Samarkand, built after the Mongol pillage, are the oldest preserved in the city today. The madrasa of Ulugbek (grandson of Tamerlane) was built in 1420 and is the oldest, while the madrasa of Sher Dor and the one of Tillakari dates to the 17th century. The site expresses all the richness and opulence of the great Samarkand, from the time of Tamerlane, while for those who want to trace back in time to the ruins of ancient Samarkand, we recommend sticking to our archaeological tour of Uzbekistan to Afrosiab. Not much is left of the legendary city destroyed by Genghis Khan, but the museum near the ruins holds some exceptional finds including a fabulous 7th century fresco. Not far from the museum is the Ulgbek observatory, built by the sovereign, who was passionate about astronomy and mathematics, and considered one of the greatest archaeological discoveries of the 20th century.

Crossed by the Syr-Darya River and nestled between the Pamir and Tian Shan mountains, the Fergana valley is one of the most fertile regions of Uzbekistan. Located in the easternmost part of the country, on the border with Kyrgyzstan, agriculture has been the main activity for centuries, on which the ancient inhabitants of the Fergana valley have focused. During the Soviet era the central government imposed a monoculture based on cotton which is still today one of the main economic resources of the region.

Gateway to the Fergana valley is the city of Kokand with the Palace of Khan(XIX century) and the madrasas of Jami and Norbut-biy. Further into the valley we arrive at the town of Margilan. An unfamiliar name for one of the largest silk production centers in the world: Uzbekistan is the third largest silk producer after China and India [2]. A key stop to learn about the history and processing methods of this precious fabric is the Yodgorlik Silk Factory, where we also stop on our grand tour of Uzbekistan, to watch the production process and to purchase some embroidered fabric or ready-made silk clothes. Happy with our purchases, we carry on through the Fergana Valley towards Rishton, famous for its colorful ceramics. Harder to transport, yet impossible to forget, partly because every store and business in Rishton reminds us of the main activity the town is so well known for: ceramics. Everything is based on the local clay, so pure that no further additives are required during processing: a drop of water and that’s it.

The end of the Aral Sea began in the 1960s, during the Soviet era, when it was decided to channel the Syr Darya and Amu Darya rivers (tributaries of the lake) to the arid plains of Uzbekistan, [3] with the aim of supporting the cotton industry. A wicked choice from the environmental point of view that has reduced, until today, the surface of the lake by 75%. An unwise decision also from an agricultural point of view, since of the 47,750 kilometers of canals built, only 28% are waterproofed and in some cases up to 75% of the water passing through them was wasted [4].

The towns that were built along the shores of the lake have now become outposts of a desert border with the lake, or what remains of it, tens of kilometers away. The skeletons of fishing boats, near the town of Muynaq, are a sad reminder of this.

2 Embassy of the Republic of Uzbekistan in Italy, Uzbekistan is the third largest silk producing country in the world (Italian article), 22nd June 2020, http://www.uzbekistanitalia.org/home/notizie/uzbekistaneilterzopaeseproduttoremondialedellasetailprimoforumuzbekoeuropeosullasetaavienna↵ 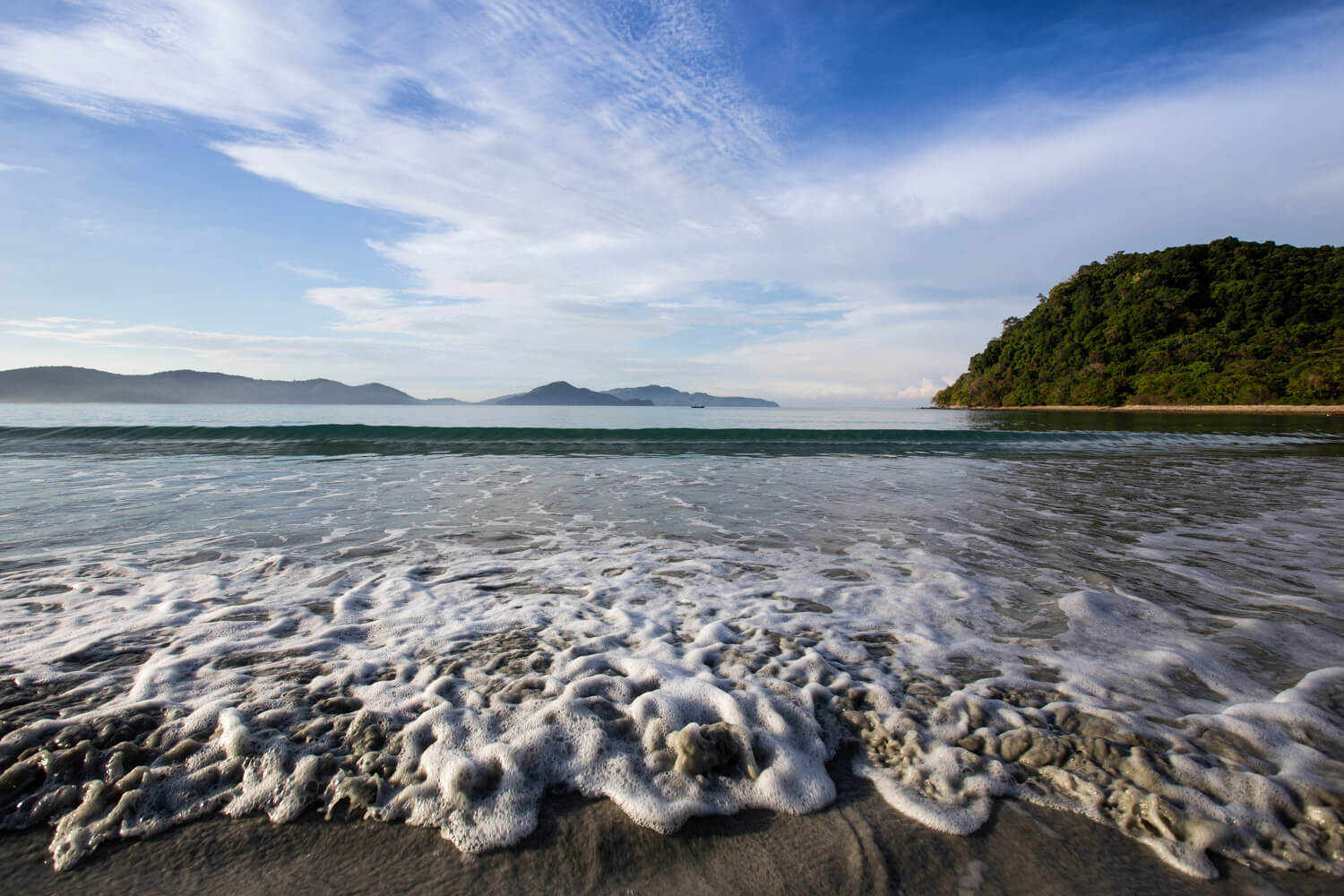